Inspiring all learners to positively impact their world. 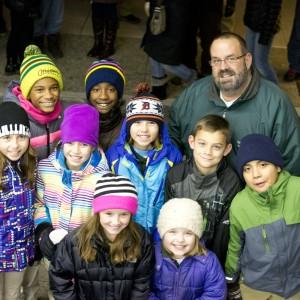 Jay Smith has been a vocal music teacher for the Birmingham Public Schools since 1990. During his tenure, he has taught middle school and elementary general music, middle school and elementary choir and directed Honors Choirs at Harlan Elementary and currently at Greenfield Elementary. His choirs consistently scored superior ratings at the Music in the Parks Music Festival in Sandusky, OH and are sought after to perform around the Birmingham Community.

Aside from his teaching, Mr. Smith has been an adjudicator and clinician for the Michigan School Vocal Music Association since 1994. In addition, Mr. Smith has performed with choirs throughout the Detroit and Windsor area including small ensembles, a capella groups, with the Detroit Symphony at the Meadowbrook Music Festival and as back up for the rock group Foreigner. From 1990 to 2004, Mr. Smith was a regular member of the Michigan Opera Theater’s chorus, as well as performed small roles for the company. His tenor voice has been heard throughout the Detroit area at churches, synagogues, Tiger Stadium (National Anthem), and the Great Lakes Lyric Opera. Mr. Smith has been a finalist twice for the United States Army Chorus in Washington D.C.